First of all, I would like to congratulate YB Dr Ong Kian Ming for a job well done as Returning Officer in the 2013 Central Executive Committee Elections. From the news in papers, I believe it was conducted transparently with no Excel errors this time. Well, it times like this, good to have an experienced "consultant" by your side, right?

Anyway, I found this tweet. Interesting, I must say:

DAP is for all Malaysians, says YB Nga Kor Ming. Now, how true is that? I googled and found the DAP CEC Candidates list here - http://www.therocket.com.my/en/list-of-cec-candidates/

I have to agree with YB Nga Kor Ming when I looked at the racial composition of the candidates. Dia tak tipu kita: 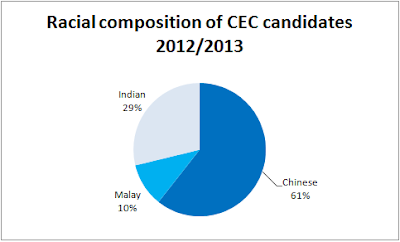 The central delegates of DAP voted on 29 September 2013 in One World Hotel. Let's take a look at the racial composition of the DAP CEC 2013: 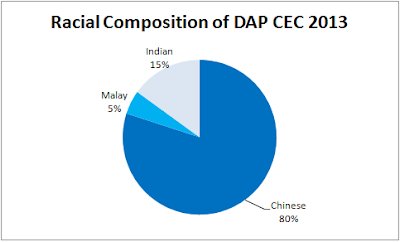 Well obviously there are no Malaysian Sabah / Sarawak Bumiputeras in the list, or did my eyes play tricks on me?

I am even more surprised when I compared the 2012 December election results with the 2013 September results. Take a look at the red numbers. 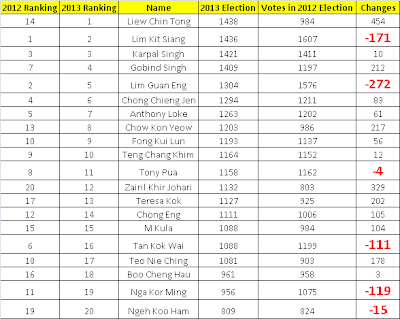 And to answer YB Nga Kor Ming's tweet, out of 7 Malaysian Malay candidates, only one made it to the top and surpassed you and your cousin YB Ngeh. One man to convince us all? Long way to go mate.

Anyone else has better analysis, eg State representations?

.. DAP can say whatever they want to say but anybody with half a brain knows that DAP = Chinese Party.

The Chinese are really smart when they keep on highlighting that Zairil is a Malay. The silly ones are those who believe them! Luckily most of the Malays are not silly ;p

What if Zairil converts to be a Christian?

Is he a Chinese Christian or a Malay Christian?

Zairil is just a figurehead. Everybody knows that. He may have Malay name, but he look chinese to me. No offence.

Singapore's PAP at least done better by having 2 Malays in their CEC and one of them is a vice-chairman.

We haven't reach Singapore's level yet, but if DAP were to rule one day, Zairil will be swept under the carpet.


could someone having Malay name be considered Malay ,how easy to be Malay put up malay name and join DAP.