Let me begin by asking, when will the media stop reporting Ong Kian Ming's statements?

Earlier today, Speaker Tan Sri Pandikar Amin Mulia said that he will investigate claims that Najib misled the Parliament with his Budget 2017 speech.

It was in response to a motion filed by DAP Bukit Mertajam MP Steven Sim against the Prime Minister.

Apparently Steven Sim and my favourite MP Ong Kian Ming cited an example where Najib said  Malaysian Communications and Multimedia Commission will receive an allocation of RM1 billion to improve the quality of broadband services and expand coverage nationwide BUT the Communication and Multimedia Ministry, MCMC's parent Ministry, has a line item of RM57.5 million as “development expenditure” for a “Broadband Project”.

For transparency, here's the budget speech line that Najib said


"207. At the same time, Malaysian Communications and Multimedia Commission (MCMC) will provide RM1 billion to ensure the coverage and quality of broadband nationwide reaches up to 20 megabytes per second."

Here's the Federal Expenditure Document for the Communication and Multimedia Ministry which Steven and Ong Kian Ming referred to. 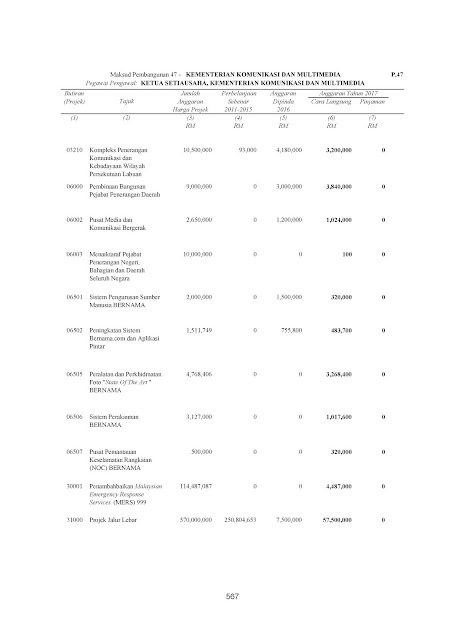 Zoom in to the last line:

Looks like Najib screwed up? I don't think so.

Let me make it clear here that the Budget was prepared by thousands of civil servants and combed through thoroughly by the Prime Minister, Second Finance Minister and the main man - Treasurer General. In fact, preparations begin every year as early as March.

No one, I repeat, no one, make mistakes when it comes to the Budget. Those in the due diligence line can be charged, suspended or sacked.

In this case, there are only two people who misled the August House - Steven Sim and Ong Kian Ming.

I do not have details on the Communications and Multimedia Ministry but based on my knowledge, there could be two reasons.

1. It is a staggered investment by the Government. OR

The USP fund was established under provision of Section 204 of the Communications and Multimedia Act 1998. (Here's the Law, here's the latest Annual Report)

The implementation of this law started many, many years ago. It started off with a RM30 million fund by the Government in 2002.

Any telecommunications company whose weighted net revenue exceeds RM 2 million will have to contribute 6 percent of their earnings from designated services to the USP fund.

In fact, during Rais Yatim's days, it was heavily discussed in the media and by senior bloggers like Rockybru, politicians such as Wee Choo Keong.

A fair question next - what is this fund used for?

It is used primarily to provide access to communications in underserved areas and to underserved groups. In simple terms, broadband penetration and mobile network coverage.

However, the Fund has also been used for various other initiatives such as to upgrade our facilities (ie not just coverage lah, quality too).

Take for example, if you look under Suburban Broadband (SUBB) initiative, the  USP fund is used to provide broadband infrastructure with speed up to 20Mbps in suburban and rural areas by upgrading the exchanges, the core network and the cabinet.

Again, in simple terms, it means that the cabling and communications tower will be able to provide better internet connections and speed.

Now, who misled the public and the Parliament?

Not too long ago in May, Ong Kian Ming actually wrote about USP here: http://www.malaysiakini.com/news/339882

Takkan dah lupa dan tak baca? Was it the time when you were photographed to be sleeping in Parliament?

And today you claimed that the Prime Minister misled the Parliament?

Countless times we have seen Ong Kian Ming create drama only to be embarrassed the next day. Yet, the media continue to entertain him and publish his nonsensical statements despite his poor credibility over the years. And today, even the Speaker fell into his trap.

Tan Sri Speaker, the only ones who misled the August House were both Steven Sim and Ong Kian Ming.
Posted by Goh Wei Liang at 9:23 PM 1 comment:

Misconception and Lies against the Prime Minister’s Department


With the Budget 2017 around the corner and rumours of the 14th General Election getting louder by the day, we can see that some politicians are beginning to spin stories and shape public perception on the Government negatively.

One clear example is the attacks on Budget allocation to the Prime Minister's Department. Some politicians like Liew Chin Tong took the path of painting the picture of a bloated Budget that can be used at the whims and fancies of the Prime Minister.

But that’s fine, I shall educate him.

They are not the same and administratively, they are run separately as well.

Secondly, the Prime Minister doesn't have the final say or veto power on the Budget and expenditure of the agencies under the Prime Minister's Department. It is the responsibility of the Chief Secretary as financial controller. Every department and Ministry has one.

Having made these clear, now let’s take a look at Chin Tong’s accusations against the Prime Minister's Department of having a bloated budget of billions.

No doubt, there are many agencies, units and offices here under the Prime Minister’s Department and my last count shows that there are 72 of them. 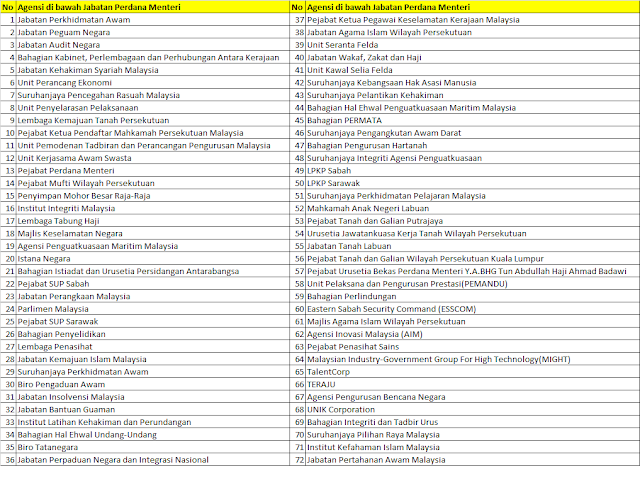 Even the Prime Minister’s Chief of Staff, Datuk Iskandar Mohd Kaus, is appointed by the Chief Secretary and he is a civil servant. 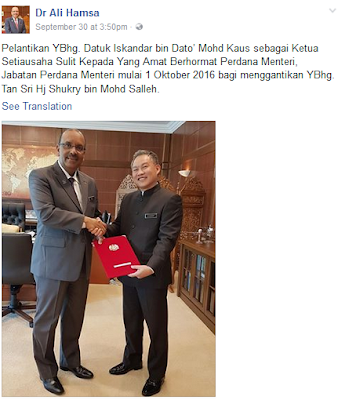 And no, the reason why we have so many agencies under the Prime Minister's Department is not because our Prime Minister is power hungry or they are all political units.

In fact, if you are hardworking enough with your research, Chin Tong, you will find that the Chief Secretary is the Chairman or chairperson of many of the agencies under the Prime Minister's Department.

I have personally seen the Chief Secretary chaired a meeting of an agency under the Prime Minister's Department because the deliverables cut across many Ministries. Due to the equal stature of the Ministers, they are not in the position to order one another to complete tasks and in some cases, the ball will be passed around.

That whip function, has been centralized and placed under the Prime Minister's Department, and in this case it was the responsibility of the Chief Secretary. The Ministers were mere members of the meeting by the way and they had to abide by Chief Secretary's decisions.

Let’s talk about money next.

The Financial Procedure Act 1957 Section 16 makes it mandatory for the Chief Accountant to prepare the audited Malaysia Federal Government's Financial Statements for the year ending 31 Dec to be presented in Parliament and for the use of all.

The funds allocated to the Prime Minister's Department are fully accounted for, audited, and reported in Parliament. The funds are not, and never, used for personal interests or gains.

There are two types of budget – operating and development.

Over the years, despite the many agencies under the Prime Minister’s Department and being criticised or accused of all sorts publicly, we have reduced operating expenditure which includes salaries and recurrent expenditures, and doubled up Development Expenditure.

There are strict rules governing Development Expenditure, a one-off expenditure, and it must be spent on items that bring benefit to the people and country.

For example, out of the RM14.3 billion in 2015, PR1MA was given RM 1.3 billion to build homes for some of you in the urban and semi-urban areas so that you have a shelter above your head, and another RM1.3 billion was given to the Economic Corridors for infrastructure development and investment attraction so that people in the East Coast, Northern Region, Southern Region, Sabah and Sarawak have jobs and bread on the table to feed their families.

Of course, these may include special allocations announced during visits across the country as well as fulfilling requests by locals or by state leaders that will only benefit the people. These projects are effectively implemented and monitored by agencies under the Prime Minister’s Department as a follow up to his announcements, never by the Prime Minister’s Office itself.

I don’t think anyone wants to question this money which at the end of the day, goes into the pockets of the people.

I can share with you some of the line items. One of the agencies under JPM is Bahagian Pengurusan Hartanah (BPH). They purchase, maintain, and manage Federal Government owned assets nationwide, including quarters, buildings in various states and others. Their budget expenditure was about RM377 mil (6.5% of total operating expenditure allocation). 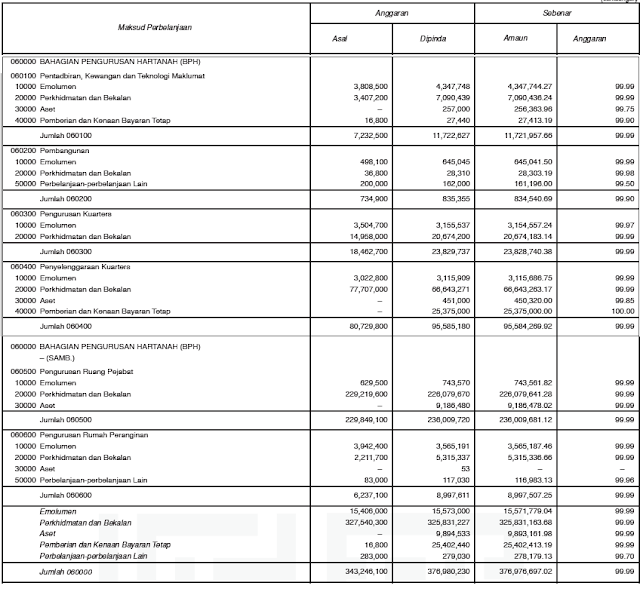 Next, Bahagian Hal Ehwal Undang-undang spent RM119 mil in 2015. This is the legal advisory unit.

Then, we have the Office of the Chief Registrar of the Federal Court with RM 412 mil budget expenditure line. I am sure DAP lawyers know better than me about the role of this office.

We also have the Malaysian Maritime Enforcement Agency, a very important agency tasked to enforce maritime laws in Malaysia, conduct search and rescue operations in our waters and shores as well as provide assistance to foreign countries when asked for. Their expenditure? RM398 mil.

Department of Statistics? RM 191 mil. If I add just these 5 agencies, it is already RM1.5 bil or 26% of total operating expenditure under the Prime Minister’s Department. I don't need to go on, you get my point.

Sure, now tell me, do we cut the Budget for our Maritime Agency? Or the Federal Court? Or Statistics Department instead because Penang Institute and REFSA can provide us with figures?

Abuses of funds, if any, would have been reported transparently by the Auditor General and Sarawak Report will probably have a copy the next morning if it wasn't.

If PEMANDU's role, in your words Chin Tong, is to massage numbers to make the Government look good, you must be our master and the bigger devil trying to mislead the public.
Posted by Goh Wei Liang at 11:38 AM 3 comments: