I refer to Lim Guan Eng's latest press statement on 8 July 2016. You can read it here  if you want to but let me summarize it for you.

This is worth your time. Just compare the two lines below, extracted from the statement.

1.     "...., as the principal funders of Penang Institute, the state government expects loyalty."

2.     "I had contrasted the Penang state government’s liberal position with the Federal government which would act against and punish those who dare to dissent publicly."

I didn't know 2+3 and 10-5 will produce different answers. Did Guan Eng just shoot himself in the foot again?

Does this mean that Penang Institute can openly criticise or express different opinion than that of the State Government and DAP now with blanket immunity?

I am quite sure you are confused about your political gender. You can't behave like an Opposition member and a Government leader at the same time.

I don't think you are drowning your sorrows with alcohol, Guan Eng.

The leaders who are in Penang Institute include:

... and so on but the rest are small potatoes, if any.

Before any of you tries to discredit me, here are the documents that were submitted by Penang Institute to the Companies Commission of Malaysia . Take it and go, for free, from me. 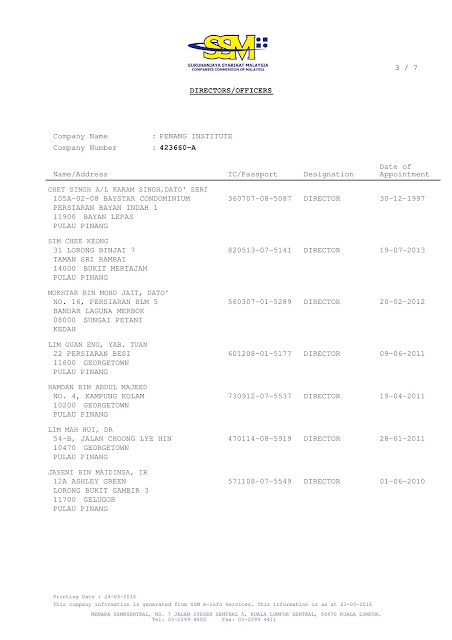 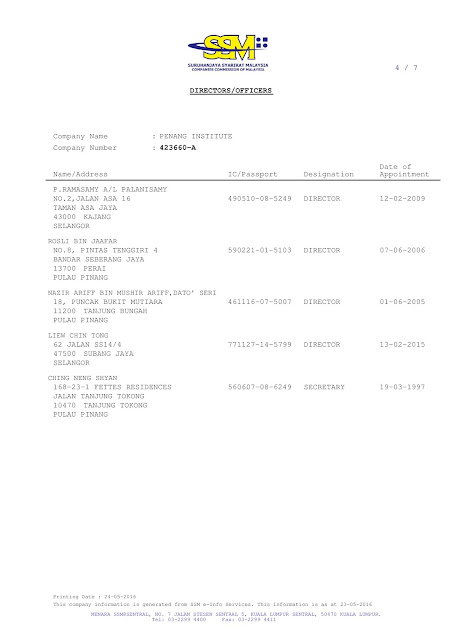 Have you lost control of these politicians in DAP, Guan Eng? What are they up to? What are you worried about?

And netizens, yes, all of the above are DAP politicians in Penang Institute, a think tank funded by Penang State Government which Guan Eng expects loyalty and advised against "biting the hand that feeds you".

What, are you all surprised? Please, DAP is not a church and they are no Vatican or Mecca. It's a political party.

Just imagine if Najib and UMNO had said this.
Posted by Goh Wei Liang at 11:25 PM No comments: