It has been a long time since I blogged. I have officially moved to twitter!

This BERSIH guys are getting on my nerves and I have a lot to say. First of all, let's start with - WHAT's BERSIH? An organization calling for clean and fair elections heavily backed and coordinated by Pakatan Rakyat. Come on, don't come and tell me "it is by the rakyat, for the rakyat". You don't speak for 28 million Malaysians.

I can hear you say, "so what if it is by Pakatan Rakyat? We want clean and fair elections!"

The Government which you accused of rigging the elections somehow kept the country's loudest, most vocal Opposition figures around so that the Government can have more headaches and trouble.

In a crucial time when "Chinese votes" are most important to Najib, BN Sarawak actually doubled their losses in Sarawak State Election 2011 and analysts pointed out that Najib has yet to win over the Chinese votes.

The Barisan Nasional Government also "conveniently" lost two of the highest income generating States - Selangor and Penang - to Pakatan Rakyat. Yes, these are "trophy states" to Barisan Nasional and they lost them.

In fact, here's the overall view of the Malaysian General Election results to date.

To see folks like Anwar Ibrahim and Saifudin Nasution shouting for free and fair elections, it is more like a comedy to me when PKR's Party Elections were reportedly tainted, rigged and unfair. Hug him if you wish, but he's not going to be my Prime Minister, no way! 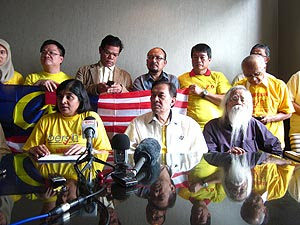 (picture from Malaysiakini)
Just in case you forgot, he's the man sitting in the middle of the table in this press conference with the "organizer" sitting to his right.