Get back to work lah

Yes your eyes are fine. Here's a picture of it.

I was surprised when I saw this, to be honest. Then I realized that this might be an honest error and wanted to see if it has happened elsewhere. Why don't we try google and see the top blunders in social media? Here's what I found – The Worst Social Media Blunders of 2013. Pictures below are from this link. 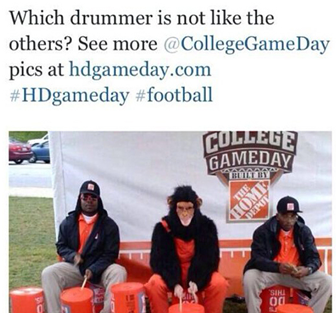 Impact: Well, this was interpreted as a racist tweet. 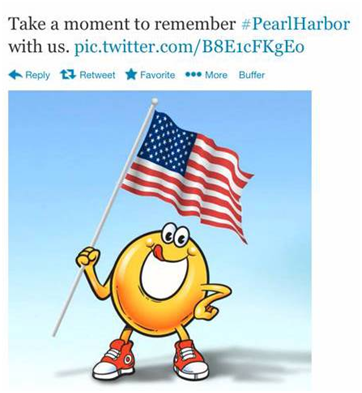 Impact: Families of American military who served during Pearl Harbour were offended, Americans were angry. 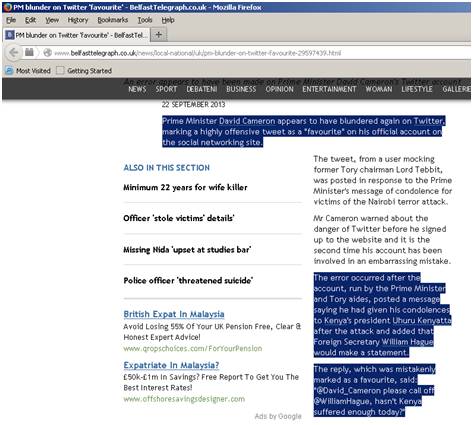 This was by David Cameron. If you can’t see the image, let me extract the paragraphs from Belfast Telegraph (not sure if this is a credible site, but this came up on google and many other sites carried it too) :

Prime Minister David Cameron appears to have blundered again on Twitter, marking a highly offensive tweet as a "favourite" on his official account on the social networking site. The error occurred after the account, run by the Prime Minister and Tory aides, posted a message saying he had given his condolences to Kenya's president Uhuru Kenyatta after the attack and added that Foreign Secretary William Hague would make a statement.The reply, which was mistakenly marked as a favourite, said: "@David_Cameron please call off @WilliamHague, hasn't Kenya suffered enough today?"

A spokesman said: "This is a deeply offensive account that the Prime Minister would never want to be associated with. Clearly the Tweet was favourited by mistake and was removed as soon as it was realised."

In July Mr Cameron posted a message in support of Work and Pensions Secretary Iain Duncan Smith's welfare reforms but blundered by including the name of a spoof account for the Cabinet minister.

Wah, David Cameron's office made social media errors too. I doubt the chap was incinerated or fed to wolves. Actually, I am quite sure of that.

In PEMANDU's case, I am not sure if it was an error or planned move. You know lah, I am one of those bloggers who really love conspiracy theories.

How do you know it was not one of those 'Jose Mourinho' diversion tactics? Do you know why he always come up with controversial statements or topics? Could it be because he wants to keep the media attention on him so that the tabloids stay away from his key players and their private lives?

Someone very high up in Malaysia was getting a lot of heat, stick, cannon balls, bazooka etc you know? #justsaying

Not long after that "tweet", PEMANDU removed it and apologized. PEMANDU said "We would like to apologize for the error in one of our previous tweets, quoting PM Dato' Sri Najib Razak. This error has been rectified." 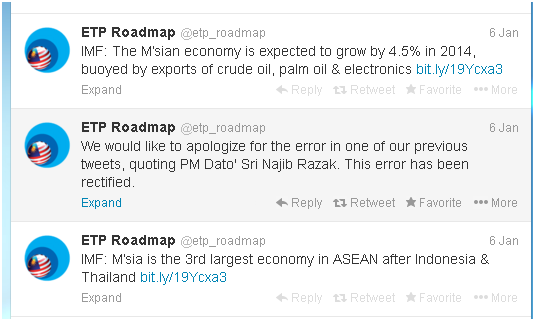 Okaaaaaay. So, PEMANDU Communications didn't try the Malindo Air twitter trick. (Read THIS). PEMANDU didn't say their twitter was hacked like Anwar Ibrahim and that Belieber picture. PEMANDU just said they are sorry. I think I know why. Whether the account was hacked, was a joke or was an error, PEMANDU probably felt that it was their fault be it cyber security, standard operating procedure or poor eyesight.

Of course, there were calls from bloggers like Life of Annie (Datuk Najib, it is now or never) and some folks on Twitter to shut down PEMANDU because many out there thinks that PEMANDU is giving the wrong advice to PM and there are Opposition moles in PEMANDU, thus that "tweet".

I know many out there are angry with the Government recently but please take note of the following:

Please don’t get me started on which Ministries or Units have been and will be hiring people for branding, communications as well as strategy roadmap development work. And I'm not even talking about PEMANDU here.

The last I check both Izhar and I were still standing on the "scale" though it is unbalanced and lower on his side (he's fatter than me). We have not and I am sure we will not take the rocket to the Moon. Too far, too dusty, I hate floating around like a devil (or angel to some) and ... it is really, really dark there.

And what both Izhar and I have done in the past 3-4 years in Malaysia, it is for us to know and for you to find out. If it helps, we clock in, shake our legs and scratch balls everyday.

Now can we move on to get some work done?


*The above blog post is the personal opinion of GWL who is having a flu, diarrhea and headache. Stay away from me. I bite.