A Reflection for Pakatan Rakyat - 2 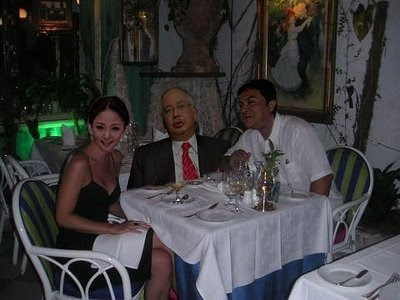 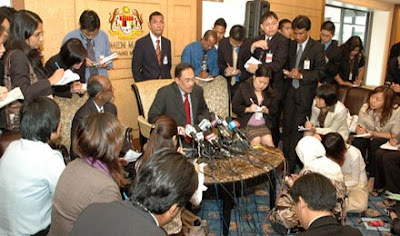 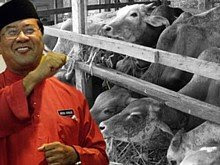 good piece of analysis. To all PR fan boys there, if you think this analysis is a piece of shit, proof it and debate wisely. The only way a person can get any wiser is to listen to criticism and improve on it if it turns out to be true. You can scream you're right and the facts are being twisted wrongly by some scrupulous party out there, what difference are you compare to BN whom you claimed had been arrogant for far too long.

It seems that PR executives are like a bunch of kiddies who pout and whine when their lollies are sntached away. At least this is the impression they gave me.

They think they are damn fucking good to be voted in but alas the truth is, people are sick of BN and want to teach them a lesson. At least in their very mind, it doesn't matter for the PR to be in power as they have a big brother in the form of BN who will keep a watch at them (BN has far more experience and doing it big time so they definitely is up to the job of catching the thief, to catch a thief, think like 1 =P) See how our lovely Khir Tohyol with all his allegations and lovely enough it is backed with hard cold proof. Yes I know it's akin to a rapist calling another thief a criminal. LOL.

On one hand, if you think of it, if you're a worker doing sales in your region, driving your own personal car, you probably would charge the fuel and mantainance to your boss wouldn't you? It's just that Khalid is too dumb to see that this can be made up to look bad on him.

I understand your desire to point out to others another side of the story but like what 1 of the former judge said, perception matters. Public especially those with access to internet are youths who are mostly anti-establishments and as such woudln't see the other side of the coin like you do.

Some conspiracists went as far and said Eli Wong case is probably PR's own doing to smear BN's image, just like how Chen Sui Bian nudge a few percentage of sympathy votes during his re-election when he hired an assassin to shoot at his non-vital part. Something from nothing. Now he have lanjan-gate scandal in the making.

A very good little piece of analysis my dear. You are right, Anwar should be sued for 100 million for accusing BN of being behind the Eli Wong photos. I am so glad I found a young man like you who is capable of clear logical thinking. I am truly amazed at how some PR supporters are behaving in the bloggersphere - giving emotional senseless responses with no relevance at all to the facts. They are treating the PR leader as a Demi-God who can do no wrong? amazing but true!

Let me sum up the two articles:

Important stuff!
(Article 1)
1. Pakatan making up BN forcing Elizabeth Wong to quit. Anwar should apologize.
2. Anwar didn't answer Saiful's challenge to take oath.
(Article 2)
1. Anwar still hasn't apologize. BN should sue him RM100mil.
2. Anwar said that the photo was a "kerja celaka", but didn't say so to Tian Chua's doctored photo.
3. Tian Chua replied aggressively when asked whether Eli was her girlfriend.
4. Hilmi might be working for Anwar
5. Arumugam still missing, might be held against his will by Kedah PKR.
6. Penang is still using selective or closed tender system.
7. Pakatan leader Khalid Ibrahim also practices corruption so Pakatan practices hypocrisy. (This item I have to omit because you have somehow failed to see his explanations - that the cows were donations (http://www.selangorkini.com.my/en/news/135) and the Lexus was his own vehicle registered to act as his official exco vehicle (which is permitted and practiced).

Unimportant stuff that happened in the same time-frame but not worth a mention:
1. Has the Perak sultan acted legally and constitutionally proper during the dismissal of Nizar?
2. What happened to the 14billion stimulus package? What of the next multi-billion package?
3. The 20 corruption cases of Khir Toyo. Time, date and details provided. http://mt.m2day.org/2008/content/view/18247/34/
4. Raja Petra charged under ISA. Is he a intended target of that law when it was enacted during the communist insurgency?
5. The three judges in Raja Petra's trial include Augustine Paul. Augustine Paul refuses to recuse himself although there are a zillion reasons for him to do so. The two other judges unanimously judged that he doesn't need to be recused. I think I smell a kangaroo.
6. PJ Anti-ISA vigil harassed time and again. Can the police leave them alone? They're just lighting candles for goodness sakes.
7. Jerit cyclist being harassed time and again. Not even this kind of freedom of expression is allowed - sheesh.
7. Anti-government demonstrations receive batons. Pro-government demonstrations receive escorts.
8. Anti-government papers are confiscated. Pro-government papers are mainstream papers.
9. Anti-government channels none. Pro-government channels all.
10. Was the MACC impartial when they work on selective cases only?
11. Has the Suruhanjaya Pilihanraya acted beyond their power by rejecting the resignation of assemblymen?

Sometimes you just have to take a step back and look at the big picture.

If you read the official Statement by the Palace, Tuanku ordered Nizar to resign or his post will be vacated.

The Constitution states that Nizar should resign. But in case he doesn't, the post will have to be vacated.

The stimulus package was RM 7 billion, my friend. We are talking about RM 7 billion of investment, projects.

Not RM 7 billion of angpow where I can give it to you cash tomorrow right away.

If you study Economics, you will understand the lagging effects of a stimulus package.

As far as I remember, Dr Mahathir and many other leaders fought each other in the media.

The so called "Controlled media" did not censor any of those.

I think Lim Guan Eng and Karpal Singh gets a lot of attention in the papers too.

The problem with the alternative media is that they report only political news.

If the alternative media is willing to report accidents, rape cases, crime, business, then by all means I am sure they can get a publications license.

By the way, I think Rocket and Harakah is among the top sellers in Malaysia - minus the mainstream papers.

So, if you can't grab hold of a copy, come see me. I can take you to the shops to buy.

MACC was selective? I guess you all just kept a blind eye on MACC's work.

A very famous Supreme Council candidate was called up. And that was very prompt too.

But then when Khalid Ibrahim's case was brought up, people say bias?

stop politicising on every small fartings and pebbles just because u guys are not patient to wait for the next general election!!!

i have had enuff of this stupidity from pakatan idiots! stop making noises and get to work! want to open trust account also dont know how.. so concentrate on governing ur state bloody stupid fools.

Here is a good posting on whether Nizar's dismissal was constitutional:- http://art-harun.blogspot.com/2009/02/perak-crisis-unsolicited-legal-opinion.html

Regarding the multi-billion stimulus packages, if I were the finance minister (a clean one that is), I will give a breakdown on how I came to the figure, for example:
1. RM100mil allotted to a fund to provide loans to SMEs to tide them through this difficult period.
2. Personal tax cut of 2% for 2009, estimated cost at RM500mil.
3. And blah blah, for a total of RM14billion.
What did I see so far? RM2billion in the SME Assistance Scheme. How do we ensure that the rest of the monies are not misused, not used to prop up cronies' companies, not disappear into thin air?

BTW you kept on mentioning the 3% EPF cut. Does it cost the government a single dime?

I do not wish to debate with you regarding the media, it's too obvious. Any fair-minded person would see how slanted and biased main-stream medias are. And BTW the alternative media can only publish twice a month (for Harakah) - that is 24 copies in a year. In case you haven't noticed this is 24 vs 365. Talk about uneven playing field. And don't start mentioning about the TVs.

Who was the "very famous Supreme Council candidate" being called up? Has the MACC come to any conclusion? Are they going to press charges?

I wish to comment on your shallow statement
Quote: "The problem with the alternative media is that they report only political news.

If the alternative media is willing to report accidents, rape cases, crime, business, then by all means I am sure they can get a publications license."

Why does it matter whether the alternative media does or does not report only political news? This is not an issue at all in countries that do not restrict press freedom - look at USA, Taiwan and even Indonesia.

Assuming you are right, if BN feels disadvantaged, by all means come out with a wholly-political paper too. It will be fairer to the unlearned among us, at least they would not misguided by the biased political news disguised between accident/rape/crime/business news.

Quote: "If the alternative media is willing to report accidents, rape cases, crime, business, then by all means I am sure they can get a publications license."
A few years back PAS applied for a daily publishing permit for a new paper called Purnama. The license has never been granted. Seriously, do you REALLY believe, if PAS agrees to include accidents/rape/crime/business, the government will approve the permit? If you do not, please retract your statement.

BTW I shall tell you how permits have been misused by our dear government. Art Harun has written a good piece on it. The message is simple - The purpose of permits and licenses is not to prohibit, but to regulate. I fully agree. Read up here: http://thegazerofnavels.blogspot.com/2008/11/of-permits-and-licenses.html

Please teach me how to work together with the majority MPs to solve the country's woes. I will be waiting for your reply. Thanks.

Also did you say that I was "politicising on every small fartings and pebbles"? Are you sure you got the right person?

I tell you something. In democratic countries such as USA, UK, France the people/senators will revolt if freedom of expression is suppressed, freedom of speech is deviled, press freedom is restricted, civil liberty not existent, corruption is condoned, judiciary system deviled, peaceful protests cracked down, government machinery targeting opponents only, massive government funds misused in scandals. However I do not see any revolts happening if Anwar didn’t apologize, Anwar didn’t answer Saiful’s challenge, Anwar said that it was a “kerja celaka”, Tian Chua replied aggressively, Arumugam still missing, Penang still using selective or closed tender system. I will let the observer rule who is the person politicising on every small fartings and pebbles.

The PKR herd must be looking at some scape goats to blame for the Lexus and the sacrificial cows that went awry.

When justice delayed is justice denied, how come the quick action of MACC became an issue?

A GOOD MAN DOES NOTHING.

What’s come around goes around.. I’m still waiting for Selangor MB... the cows and his Lexus wont gave him any good news..and to Anwar and tian chuah, screw you!

It is the quick action of the MACC on a non-issue that is a problem. This is amplified by their total neglect of bigger corruption cases concerning BN politicians.

To the two anons above, have you read the reasons given by Khalid? Do you agree with what he said? Lets debate based on your answers to these questions.